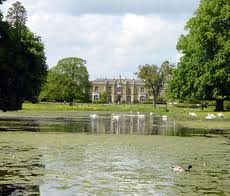 The large village of Great Missenden is a peaceful, agricultural place perhaps best known for its famous previous resident children’s author Roald Dahl. The village was also once home to the famous writer Robert Louis Stevenson; so it is no surprise that this little village is rather proud of its literary history. The organiser of an 18th birthday party we catered for recently in Great Missenden admitted to us that she had suggested the Roald Dahl theme for her son’s party, which explained the scenes from various books papered all over the large garden where I was to set up the hog roasting machine.

As usual we arrived a good four hours before the event started off, as hog roast chef I set up the Titan machine, placing the whole pig on the spit and starting up the machine with ease. Then I set up some tables on which to prepare food from fresh; salads, potatoes, dips and the like, along with baked bread rolls and butter. I also prepared the vegetarian pastas and nut roast, placing each one in plastic display cases. I was instructed to swap the utensils I had brought for some ladles and spoons the host provided depicting 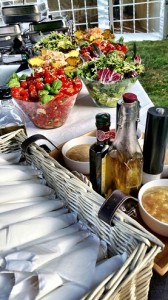 characters from Roald Dahl’s books. It looked absolutely charming by the time I had finished, and when I finished with the puddings and set them out the host commented on the sight making her feel hungry already.

By the time guests started to arrive at the promising hog roast Great Missenden event, all dressed up as various characters from the books, the hog was about an hour away from completion. The crackling was just starting to brown and looked fantastic, and the smell wafted across the garden attracting a great deal of attention. I never get bored of the look of wonder on guests faces when they see an entire roast hog turning on a spit, it really is a theatrical sight!

Spitting Pig offer full menus and catering for any event you can think of for hog roast hire Great Missenden. As a caterer, one of our more popular options – as was in this case – was our ‘hog in a roll’ option; delicious warm, just carved pork in our soft bread rolls with a good helping of apple sauce. The hosts had asked for a few extra things, after I finished the buffet foods, such as more salad and potatoes, which I then prepared well in time for the carving of the hog. As usual, guests came back for more and soon everyone was sat or standing in the dusk of the garden, chattering happily holding their hog in rolls.

When guests started helping themselves to the selection of puddings, I started to carve off all the leftover pork from the hog roast. One thing I can’t stand is waste, but I didn’t think there was any danger of that with teenagers around. Carving off all the meat and placing it out on the newly cleared tables along with the buffet leftovers, I brought out more bread rolls and sauces for anyone needing a little sobering up later. I also helped the host and her son take the food into the house and set it out in the kitchen while the rather frazzled-looking father of the birthday boy set up some games in the garden.

One of the best th 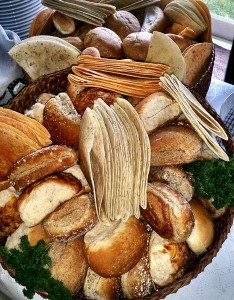 ings about the hog roasting machines I use and which can be bought or rented from this site is that they can be moved from place to place with a great deal of ease, which is something I’m not used to dealing with in the catering industry. Usually we have to muck about with so many things to get the catering even started at a car boot sale or event but the machine is so easy to set up, and by lunchtime there is usually a queue lined up to taste my carved pork in buns and apple sauce. It’s quite a welcome change from the greasy burgers and chips usually found in the carts at fairs and car boot sales, although the machine is more than capable of cooking burgers too – sans the grease, of course. This is your first stop for hog roast hire Great Missenden.

With the machine and all my rubbish packed up in my van, I left the hog roast Great Missenden event and the happy teenagers to party on into the night. I later found out that one of the guests had been so taken by the hog roast idea that she had requested the hire of one from Spitting Pig for her own party a month later. Any event, any time of the year, any age, a hog roast really can make a party!